Posted on December 15, 2014 Categories: Press Clips Comments are off for this post

On diversity & inclusion: Starting to break the “green ceiling” 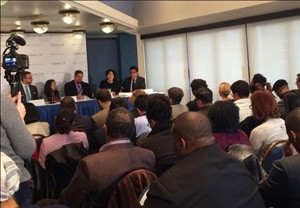 December 11, 2014
There’s been a lot of discussion recently of the stubbornly homogenous composition of the mainstream environmental movement. This summer, a comprehensive report found that environmental organizations and agencies have yet to break down the 12-16% “green ceiling” for recruiting and retaining people of color to their staff. In plain language: the environmental movement is primarily run by white folks.

The eight years I spent working for mainstream environmental groups before joining Resource Media taught me a tremendous amount about the strengths – and weaknesses – of the environmental movement. One of the most obvious flaws has always been the inability of these largely white, middle- to upper-class organizations to connect in any real way with communities of color: their issues, their experiences, their needs. I was present for countless conversations about how to “reach” African Americans, or Latinos, or inner city youth, or any one of a variety of communities whose voices have not been well represented by the Big Greens.

Very rarely, I was privy to conversations about how the Big Greens could do more to help these communities reach them, or to find ways to work on the issues that matter most to other communities.

In many exciting ways, that finally seems to be changing. Earlier this week, I was fortunate to attend a fascinating discussion of opportunities for the mainstream environmental movement to break that “green ceiling.” The event featured a wealth of notable speakers, including U.S. Environmental Protection Agency Administrator Gina McCarthy, incoming NRDC President Rhea Suh (former Assistant Secretary for the Department of the Interior), and Mark Magaña, Founder of Green Latinos. But even more striking than the diversity of panelists was the diversity of the audience.

This was, by far, the most diverse audience I’ve ever seen at any environmentally-focused event. That fact became particularly resonant when I reflected on the stories told by many of the panelists about finding themselves the only person of color in a sea of white faces at environmental events.  Robert Raben told the audience that he decided to found Green 2.0 after attending a 1,200-person environmental banquet in which the only other people of color in the room “were the ones serving the food.” (Raben’s consulting firm The Raben Group provided pro-bono support for the rollout of this summer’s report on diversity in the mainstream environmental movement.)

I have always “belonged” in the environmental movement, what Green 2.0 has dubbed “The Green Insider’s Club.”  And I was not the only white person in the room when Raben told that story, but for the first time, I felt almost like an outsider. Because in that room, on that day, I suddenly felt too white to truly understand the challenges that people of color must face to feel a part of this movement, no matter how much they share the movement’s values.

Yet I also knew I did belong in that room. Because what Green 2.0 and other such efforts are working towards is a day when all people, no matter their color, can have that sense of “belonging” when they choose to work on environmental causes.

But enough of my words. The visionaries who spoke at the “Breaking the Green Ceiling” event said it best, and here are some of their words (with apologies for any inadvertent misquotes caused by my bad handwriting):

“Make yourself uncomfortable [about diversity]. Get to the table. It’s part of the challenge of a growing United States of America.”

“Diversity is a value. It’s not an event, a program, a date in February. There’s no end point. There’s no ‘Okay! We’re diverse enough!’”

“Diversity of perspective, of approach, of experience, matters. That difference makes all the difference.”

“I think of my baby daughter… This is not a spanking or shaming moment. This is an ‘eat your vegetables’ moment, so we can all grow big and strong together.”

Op-Ed: How Better Data Can Lead Nonprofits to Greater Diversity